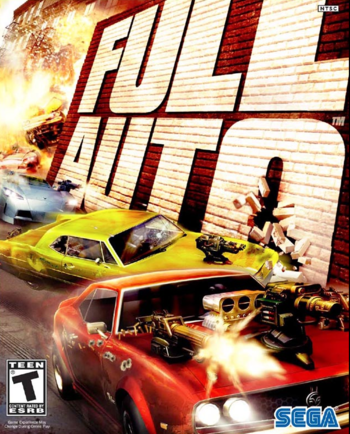 Best described as "Burnout with guns", this Pseudo Interactive (the makers of Cel Damage) and Sega joint, released for the Xbox 360 in early 2006, challenged players to compete in races using cars mounted with machine guns, rockets, missile launchers and all manners of fun toys. Unlike many other racing games with combat elements where weapons are often Mario Kart-esque one-use items, the weapons in Full Auto are permanently mounted on the competitor's cars, have unlimited ammo and can be used at any time (barring overheating and a cooldown period at the beginning of each races), allowing for much more carnage. Full Auto was also notable for its "Unwreck" mechanic, which allowed solo players to go back in time by a few seconds and undo their mistakes, predating the adoption of similar time-rewinding mechanics in more traditional racers such as Gri D and Forza Motorsport.

A sequel, titled Full Auto 2: Battlelines, was released later that year as a launch title for the PlayStation 3 . More of a remake than a true follow-up, Battlelines introduced an actual plot: the career mode begins with the player's garage being contacted for assistance by SAGE, the benevolent guardian AI of Meridian City, whose components have been mysteriously stolen as an anarchist group called the Ascendants is taking the streets by storm. Battlelines put a greater focus on the Vehicular Combat Arena mode (which was an option in the first game's multiplayer, but was not featured at all in the single player campaign) and streamlined various mechanics for a more intense experience.

A Playstation Portable version of Battlelines was also released, which featured a more extensive customization feature and a different plot about foiling the dark designs of the Master/Slave Organization.