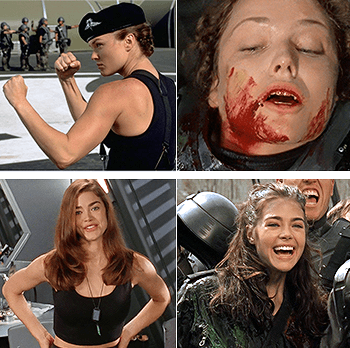 If Dizzy had watched Aliens, she'd've seen this coming.
"... people can call it typecasting, but I pigeonholed myself... Saying no to the girlfriend, saying no to the girl that gets captured, and eventually, I just got left with the strong chick who's always being killed."
— Michelle Rodriguez
Advertisement:

When two Action Girls are featured in the same film, frequently the tougher, more aggressive and less feminine character will die, despite being better equipped for the situation at hand.

One of the reasons is the belief that the femininity and sex appeal of a female character determines their usefulness as Love Interest or Fanservice or, in the most insulting cases, their reason to be in the story at all. A more charitable explanation would be that there's much more shock value in killing the tough, competent warrior; that arguably, statistics says the person who runs into danger will have a higher chance of dying; and that leaving the less warrior like one around thus increases suspense, since her survival isn't as assured, especially if Anyone Can Die. It's easier for an audience to feel fear if the Final Girl is less battle savvy and thus more vulnerable — a hardened Vasquez left alone wouldn't be as terrifying. The death of the Vasquez character is thus a form of The Worf Effect or Sacrificial Lion.

Writers will sometimes compensate by making the more attractive woman some sort of mysterious secret agent, thus relegating the Vasquez character to a Mook or Red Shirt by comparison. This may also be a byproduct of filmmakers' insistence that the female lead (who is likely to outlive her supporting cast in an action movie) be significantly more attractive than anyone else.

Compare Bury Your Gays, Faux Action Girl, Final Girl (the weakest and most innocent girl is the only one to live, but take note that like the Vasquez, the final girl is often androgynous in that she isn't usually stunningly beautiful nor does she take part in traditionally feminine activities too much), Black Dude Dies First, The Worf Effect, Death by Pragmatism. Contrast Real Women Don't Wear Dresses (in which the less feminine woman will survive for being less feminine). Also contrast Girly Bruiser (the most feminine female survives because she can kick ass in addition to being feminine) and Lady of War (in which case elegant and graceful fighting counts as feminine). This trope overlaps with The World's Expert on Getting Killed, where the most qualified person in the whole cast, male or female, is killed early on and often with ease, to ratchet up tension and danger.

The Trope Codifier has to be Michelle Rodriguez, as most of her roles have done it and more specifically each time.