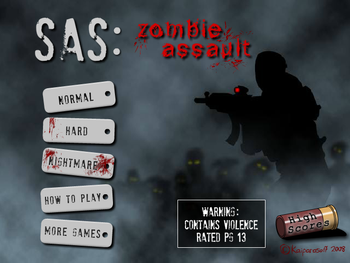 SAS: Zombie Assault is a famous series of Shoot Em Ups by Ninja Kiwi. Currently, there are four main games (Five if you count Insane Asylum) and a Tower Defense Spin-Off. Alternatively, the guys down at the SAS Zombie Assault Wiki have created a list of tropes for SAS 4 which can be accessed here

. So far there are 4 parts of the game made in the following order: SAS 1

Tropes across the entire series include: