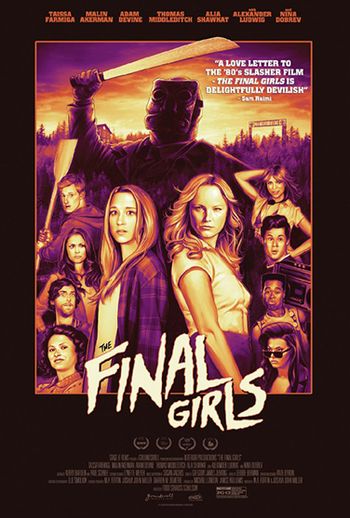 The Final Girls is a 2015 horror dramedy which is an Affectionate Parody of the Slasher Movie genre. The story is about a girl named Max (Taissa Farmiga) whose mother was an actress whose career has been stalled because she starred in a slasher film called Camp Bloodbath.
Advertisement:

Three years after her mother dies in a car accident, Max is invited to a screening of Camp Bloodbath where she and her group of friends get sucked into the movie. They must now figure out how to survive before getting killed one by one.

Surprisingly charming and heartfelt, this one is a gentler deconstruction of slasher movies.

It is unrelated to the Riley Sager novel.