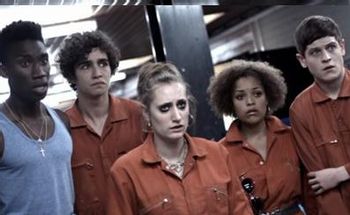 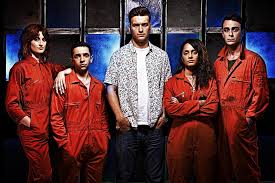 The gang in series 4 and 5: Abby, Finn, Alex, Jess and Rudy.
Curtis: So, what happens now? Is this it? We gonna be like this forever?
Simon: What if we're meant to be, like, superheroes?
Nathan: Superheroes? You lot! No offense, but in what kinda fucked-up world would that be allowed to happen?
Advertisement:

Misfits is a British Speculative Fiction series about a group of young offenders on a community service programme, who get caught in a freak electrical storm that imbues them with superpowers. The series debuted in November 2009 and the second series aired the following year with a bonus Christmas special. A third was broadcast in late 2011, minus Robert Sheehan (Nathan), and a fourth series in 2012. The fifth and final series aired in 2013. It won the BAFTA award for Best Drama Series in 2010.

The "Misfits" are a group of five 20-somethings who are united by a series of traumatic events, and the emergence of their freaky new superpowers. These newfound abilities all relate to their deepest personality traits and psychological drives; turning their desires into realities, and their greatest weaknesses into weapons.

Later additions to the main cast:

The Series is described by The Other Wiki as a "live-action superhero comedy drama", but is more frequently deemed X-Men meets Trainspotting.

Not to be confused with the band of the same name. Or Misfits of Science, which has a similar premise.