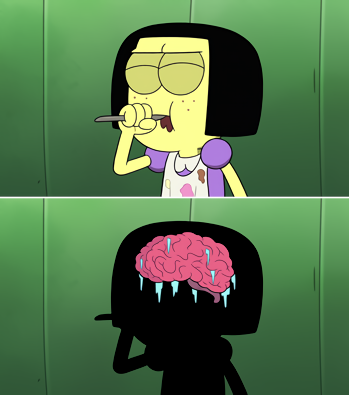 "I think I froze the left half of my brain! (Waves arm around stiffly) Look! I can't move my right arm!"
— Charles de Mar after snorting "pure" snow, Better Off Dead
Advertisement:

Characters eating cold food or drinks too fast will get a "Brain Freeze". Almost universally a Comedy Trope. Brain Freeze will be treated as the most searing pain imaginable. Expect to see rivers of tears, screams of anguish, and the victim frantically clutching his head in agony.

Truth in Television; you most definitely can give yourself a headache by eating cold food too quickly. This is due to the blood capillaries in your sinuses; cold food causes them to constrict, and then experience extreme rebound dilation as they warm up again. This rebound triggers nearby pain receptors, which the brain interprets as coming from the forehead. You can recreate this effect when you put an ice cube on your forehead (and you don't have a headache, that is).

Now, if you want to prevent it, just lick your soft palate before diving into that milkshake and you should be fine. Eating warm or hot food can also help.