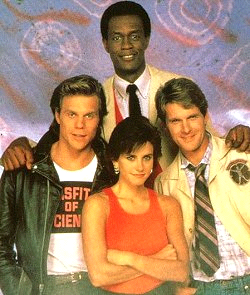 Before there was Heroes...
Advertisement:

Misfits of Science is a short-lived American superhero fantasy television series that aired on NBC Fridays at 8 P.M. EST (against CBS's Top 10 hit Dallas) from October 1985 to February 1986.

It featured a cast of super-powered humans who work for Humanidyne Institute and their madcap adventures. Sort of like The A-Team meets the X-Men. The team consists of Dr. Elvin "El" Lincoln, a seven foot tall man who tried to make himself more normal sized, but who wound up giving himself shrinking powers instead; Johnny Bukowski, aka "Johnny B", a rock and roll singer who was electrocuted on stage and got electrical powers and Super Speed, but he can't turn them off; Gloria Dinallo, a Troubled Teen with telekinetic powers; and Dr. Billy Hayes, who somehow manages to get the clashing personalties of the others to work together and so usually leads the Misfits' escapades. Another member, Arnold "Beef" Beifneiter, aka the "Ice Man", was introduced in the pilot movie but quietly dropped when the series proper started, due to legal issues from Marvel Comics.

Billy and Elvin work together at the Humanidyne Institute, which studies human anomalies like Johnny, Gloria, Arnold, and Elvin himself, and their current line of research often ties into each episode's plot. Their boss is Richard "Dick" Stetmeyer, the neurotic director of Humanidyne who just wants them to do their research, but Billy would rather galavant about, solve mysteries, and stop criminals.

An episode was written by Tim Kring, later the creator of the NBC show Heroes. A double-length pilot and 15 additional episodes were created; all episodes but one were broadcast in the United States during its original run. In France, the series was known as Superminds. In Germany where it was known as Die Spezialisten Unterwegs (The Specialists on Their Way). The Mexican Spanish dub called the series Los científicos rebeldes (The rebel scientists).

The pilot can be seen here

Not to be confused with Misfits.