Series / Minute to Win It 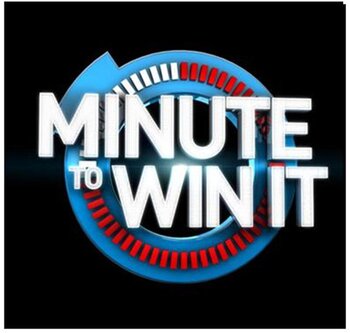 In 1950, Goodson-Todman created Beat the Clock, a Game Show where the objective was for couples to perform bizarre stunts within a time limit (hence, beating the Clock) for cash and prizes. The show was at its prime from the 1950s through the mid-1970s, but like many classic games, it has since faded into history (and received a crappy, short-lived revival on PAX). Fast forward to early 2010, and a new show hit the airwaves to bring a revival to this concept, called Minute to Win It.

Originally aired by NBC and hosted by Food Network personality Guy Fieri, a contestant (often a couple or similar tag-team in later episodes, but originally a solo player) tries to complete 10 tasks of increasing difficulty involving various household items. As the title of the show suggests, each task has a time limit of 60 seconds; either having to complete the task within that time, or performing a certain task for the complete period. If the task can't be completed (by running out of time/chances/whatever other oddball loss condition they can think of), the player loses one of their three lives, and losing all three ends the game and drops prize money down to the last safe point.

That last point may seem a little familiar. And it was — a little too much for some people's liking. That, combined with low viewership on its original Sunday night slot, led to its producers making changes and experimenting with new ideas (such as a Celebrity Edition and a "Last Man Standing" format). When a re-tooled Minute returned for a series of episodes over the summer as a lead-in to the popular America's Got Talent, it fared much better for NBC. Minute returned for a new season in December, beginning with a series of Christmas episodes, followed by more in the new year. And then people started complaining that Deal or No Deal rubbed off on it. Well, you can't please everyone.

After a hiatus (which also saw Minute's producers handling NBC's newest import, Who's Still Standing?, and seeing it promptly blow up in their face), the NBC version was officially axed in May 2012. Shortly after its cancellation, GSN picked up reruns of Minute, and then Un-Cancelled it in June 2013 with speed skater/Dancing with the Stars winner Apolo Ohno taking the helm, and a top prize of $250,000.

Failure to return to the TV Tropes home page in 60 seconds may result in elimination.