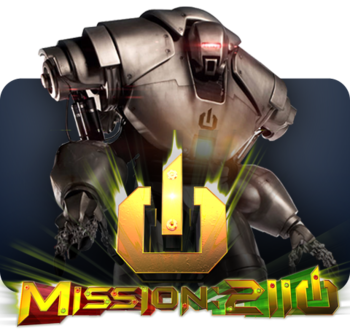 Mission: 2110 was a British childrens' Game Show that aired on CBBC, with a tie-in web game, about groups of children trying to fight back against a horde of hostile robots.
Advertisement:

In the 2030s, the Roboidz - toy robots that could think for themselves, essentially - were invented, and over the years were refined to become humanity's helping hands. Eventually, though, they decided they had enough and exterminated their creators, turning their victims into the zombielike Shades. By the year 2110, only one human (as far as he knows) is left alive: Caleb, the partially-robotic son of the Roboidz' creator, and he's not happy with the canheads occupying his home. To combat the Roboid menace and take back the Earth from them, Caleb recruits children from the year 2010 to infiltrate the Futuregate ship, the Roboidz' home base, and trains them while simultaneously raiding their power reserves, ultimately taking his finest recruits to a final assault on the Roboidz and their leader Neuros.

Four teams of four recruits, over the course of 12 episodes, would be whittled down to just four for the final assault via a series of games.