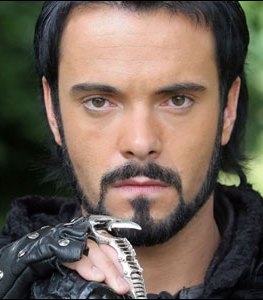 ”May the luck of the Raven’s Eye be with you.”
Advertisement:

Raven was a BAFTA-winning BBC Scotland children's adventure game show shown on CBBC in the UK and on BBC Kids in Canada, and completed production after ten series and three spin offs (though later had 2 more series; see below). It was hosted by James Mackenzie in the title role, who conducted a group of children, known as warriors, over five days through a series of tasks and feats. At various stages in the adventure, the group lost the least successful warrior, until only two remained to go through to the final week to compete for the title of Ultimate Warrior. Failure in any challenge cost contestants a life, symbolised by one of Raven's feathers. Success was rewarded with gold rings; gain nine rings and they could be exchanged to win back a life.

The challenges faced include tests of intelligence, skill and agility, strength, races, and the occasional tests which involved jumping from a great height or into freezing cold water. The challengers competed until the final stage where they faced off against Nevar to claim the prize of "Ultimate Warrior" and their own Staff of Power.

The series resulted in several spin offs which tended to focus on contestants operating in teams. Unlike in the previous series, teammates lost during these challenges could be "bought back" only once each, by trading the MacGuffins their team had gathered (though not in the first spinoff; see Anyone Can Die example below). The spinoffs also tended to incorporate more backstory in with the gameplay, and introduced other characters for exposition and for Raven to interact with. A DVD game based on the main show was also released.

An eleventh series started in December 2017 and stars Aisha Toussaint as a new Raven though James Mackenzie's Raven (now known as Raven of Old) also appears. The format however is different than previous series: 4 warriors compete for three days under an animal emblem for all of the warriors in that heat (Bears, Wolves, Wildcats, and Stags) and only rings are used to separate warriors in the placings with a challenge loss costing one ring. The last placed warrior is eliminated on day two and the final three complete the Last Stand on day three; only one warrior from each heat moves into the Grand Tournament/finals in which they become the final four and compete to win the title of True Warrior. A twelfth series using this same format aired during June 2018 albeit with the groups of warriors being shown doing their heats in a different order than in series 11.

A shortened Gaelic language remake of the above new Raven format aired in March 2018 on BBC Alba and had three warriors competing over six days and thus there were no eliminations (the episodes of this version are fifteen minutes long and so have only one or two challenges per episode). Raven of Old is also He Who Must Not Be Seen in this version (though commentary on the challenges is done by him as is the case in some challenges in Series 12).