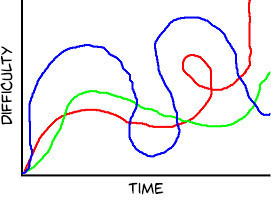 Charted for your convenience.
"There were sequences really near the beginning that kicked my ass until I was wearing my buttocks like a hat, while the closest thing to a final boss fight is basically you versus a wheelchair-bound cross-eyed hobbit, and you're armed with the BFG 9000."
— Zero Punctuation on Halo 3
Advertisement:

This happens when a game has a difficulty curve that makes no sense. The game isn't always hard. It isn't always easy. It just can't seem to make up its mind. There are even portions that seem to be the perfect difficulty, but you never know when one will turn up. Maybe there's an element of the game design that does not work particularly well. Maybe the developers were trying to make the game feel realistic. Maybe they just had no clue what they were doing. Whatever the case, you've run into Schizophrenic Difficulty.

Often occurs when major elements of gameplay are left to the Random Number God. Random dungeon layouts can put important equipment on the bottom floor. Random stat growth can rob your tank of vital Hit Points. A Crutch Character or Exclusive Enemy Equipment that is only available on a few scattered levels can also make portions of the game much easier than others. And sometimes, it is the level design itself that makes things too difficult.

Compare Difficulty Spike or That One Level, when a single level is much harder than its preceding levels, and Breather Level which is its inverse. Also see Early-Bird Boss, which can cause this in the early parts of RPGs and games with RPG elements.

Non-Indicative Difficulty is an extreme case where, for example, playing on "Normal" is harder than playing on "Hard", at least in some way.