Pinball / Ripley's Believe It or Not! 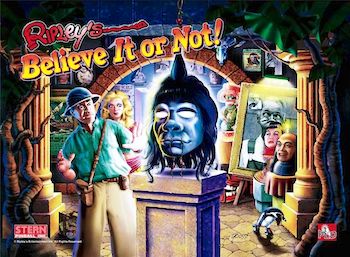 The Strange, the Bizarre, the Unusual!
"Welcome to Ripley's Odditorium."
—Robert Ripley
Advertisement:

Ripley's Believe It or Not! is a 2004 pinball designed by Pat Lawlor, with artwork by John Youssi and released by Stern Pinball. It is based on the franchise of the same name.

The player is on a quest with Robert Ripley as he travels the seven continents of the world to collect strange objects. Gather Tomb Stones in Europe, search for Bigfoot in North America, chase penguins in Antarctica, and dodge boomerangs in Australia. Go for the upper playfield temple and try to collect the colored jewels to unlock a reward. Activate the magic Idol to redirect the ball, then shoot the snarking Shrunken Head to start multiball.

Although the Shrunken Head is a bit unnerving for some, Ripley's is considered to be a fun game for players of all levels, with smooth flowing action, easy goals to entice beginners, and a good amount of depth for experts. A digital version is available on The Pinball Arcade and Stern Pinball Arcade.