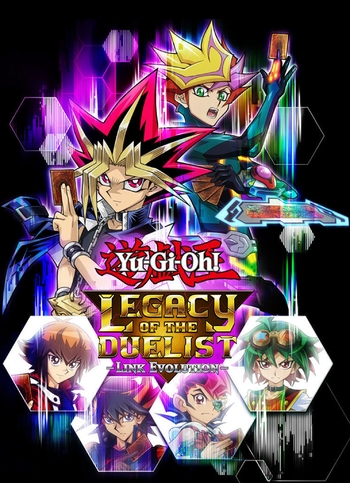 Relive moments and duels from all of the animated series!
Yu-Gi-Oh! Legacy of the Duelist (sometimes called LOTD) is a Yu-Gi-Oh! video game released for the PlayStation 4 and XBox One in July 30 and 31 2015, with PC getting the game on Steam December 7, 2016.
Advertisement:

Set in the world of the various anime series, relive the legacy of Yu-Gi-Oh!, Yu-Gi-Oh! GX, Yu-Gi-Oh! 5Ds, Yu-Gi-Oh! ZEXAL, and Yu-Gi-Oh! ARC-V by playing through all of their most iconic duels in the Campaign Mode. Players can test their skills further by taking on the Duelist Challenges mode, where every character in the game gets an upgraded deck with more powerful cards and better strategies than what they used in Campaign Mode. Battle Pack offers a different breed of challenge, forcing players to win with either a 50-card deck made instantly in Sealed Play or make their own 45-card deck from random boosters in Draft Play.

On April 25, 2019, An Updated Re-release named Yu-Gi-Oh! Legacy of the Duelist: Link Evolution was released exclusively for the Nintendo Switch in Japan, but eventually made its way to the USA and Europe on August 20, 2019. Playstation 4, Xbox One, and PC received the game later on March 24, 2020. This version of the game includes a Campaign Mode for Yu-Gi-Oh! VRAINS, as well as the Master Rule 4 update to the real card game's rules. It also included all content from the original Legacy of the Duelist that was once DLC, with updated Campaign Mode cut scenes to boot.