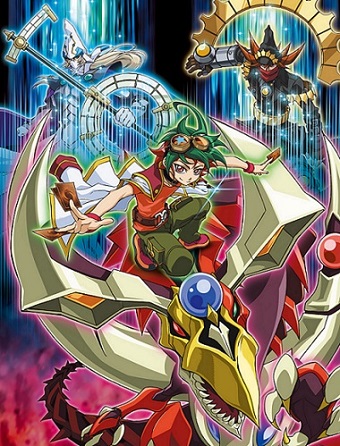 Swing! Pendulum of the Soul!
"Locked in battle, duelists and their monsters are kicking against earth and dancing in the air! They storm through this Field! Behold! This is the newest and greatest evolution of Dueling! ACTION... DUEL!"
Advertisement:

The fifth series in the Yu-Gi-Oh! franchise, which first aired on April 6, 2014, and concluded on March 26, 2017, spawning a total of 148 episodes. ("ARC-V" is a double pun: it literally means "Story Arc 5", but the "V" shape also refers to the arc of a pendulum. note The term does have a meaning in the series proper, but said meaning is introduced very late into the story and constitutes a major spoiler.)

In the world of ARC-V, significant developments in hard-light technology have given birth to "Action Duels": a new form of sports entertainment where Duelists fight alongside their monsters in spectacular fantasy arenas and aim to win the crowd as well as the fight.note Those duels include Action Cards, which can be found on the Action Field. Action Cards can be activated from the hand in any turn and they usually allow the player to escape from enemy attacks or to give their monster more offensive power. Action Traps have mostly a negative effect for the player.

Yuya Sakaki is an eighth-grader who aims to follow in the footsteps of his Disappeared Dad and become the most popular Entertainment Duelist in the world. When the pendulum pendant he received from his father suddenly begins to glow during a televised exhibition match, Yuya unlocks the incredible power of Pendulum Summoning: An unknown form of Summoning that could be Yuya's big break into showbiz... Or lead to a whole heap of unwanted trouble.

Similar to previous series, there are Duel Schools which teach people how to duel and in different styles; though unlike previous series, those are afterschools and regular schools indeed exist. However, the Fusion, Ritual, Synchro and Xyz Summonings are taught only in elite schools, with the Leo Duel School (LDS) being the monopoly of the entire world. With Yuya's creation of Pendulum Summoning, a new Summoning method was born that had never been seen before. Despite being a student of the low-level You Show Duel School, he decides to prove that the school's Entertainment Duel style can compete with anything.

Then the Wham Episodes start coming. One right after the other.

ARC-V evolves into a Deconstructor Fleet of tropes and plot elements that had become stables of the Yu-Gi-Oh! franchise, then pulls a Decon-Recon Switch as the story develops. Realistic outcomes are invoked repeatedly: the hero having rare cards no one has seen before means people try to steal or duplicate them, the danger presented by Hard Light holograms justifies the card game being treated as Serious Business, and the villains utilize this technology to wage war through dueling. The result is a Darker and Edgier Yu-Gi-Oh! series that manages to be more realistic and serious while still staying lighthearted and idealistic enough that it keeps true to the core themes of the franchise. Being that it aired in time for the franchise's 20th anniversary, it also pays homage to what has come before it, but how it does so is a massive Walking Spoiler.

As of November 15, 2016 official subs are available on Crunchyroll. You can legally view it here

Warning: While a good few spoilers are hidden, some spoilers are left unmarked! If you wish to watch the series without any spoilers, you have been warned.