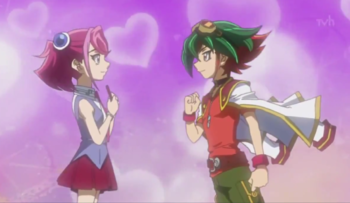 Shockingly, ARC-V is full of ship tease - especially for a Yu-Gi-Oh! show, which is pretty much No Hugging, No Kissing Central - so much so that it needed its own page for them all.

Yes, Yuya and Yuzu get a section to themselves just because they have that much ship tease.