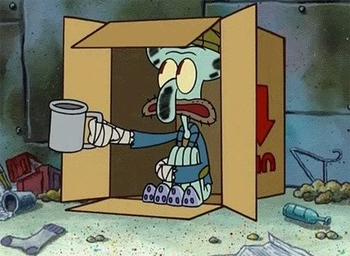 Who lives in a cardboard box under the sea?
Advertisement:

Homes can be made from all kinds of materials, from straw, to wood, to brick. But some people can't afford anything fancy like that and they have to make do with cardboard.

A character who has to improvise a shelter from a cardboard box is still effectively homeless, but technically speaking, it is a "home". If this trope gets Played for Laughs, its owner will treat it with the same dignity and respect commanded by an actual home (maybe even a Big Fancy House), and expect any visitors to do the same.

May be a Mundane Luxury. Compare Horrible Housing, which is at least in a building, but is still used to mark its inhabitants as poor. Sleeping in a tent is perhaps more common among Real Life homeless people than a cardboard box, but the more desperate cardboard box is more commonly portrayed by writers of fiction.