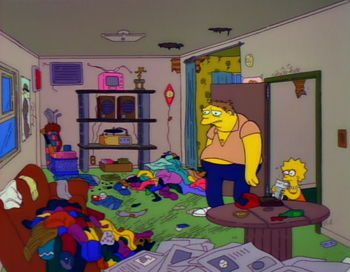 Horrible Housing refers to a living space that is basically a hovel: cramped, messy, possibly pest-infested, and usually in the bad part of town. It may be poorly-maintained government housing or owned by a Cranky Landlord that refuses to spend on maintenance and repairs. This indicates that the inhabitants are poor and cannot afford to move somewhere better, or are suffering through a bad turn of events. The characters likely will complain about their living conditions and hope for greener pastures, especially if there are wealthier characters in the work or if they used to live somewhere nicer themselves. However, sometimes characters will choose to live in bad conditions for various reasons, such as the "charm" and the surrounding community, or they may be Too Desperate to Be Picky about shelter. Trashy Trailer Home is a subtrope, which treats the wheeled sort as the worst place imaginable to live.

This trope is the antithesis to Big Fancy House, which is a house that is spacious, clean, well-furnished, and usually inhabited by the rich; works may utilize both to contrast its inhabitants. Also contrast Pottery Barn Poor, where a supposedly poor family has a nice dwelling by normal standards, and "Friends" Rent Control, for when an apartment is much nicer than its inhabitants should be able to afford.

Compare The Alleged House, which refers to a housing structure that is barely holding itself together — there can be overlap, but the difference is that Horrible Housing is primarily used to highlight a character's poverty. For example, a seedy, cockroach-infested studio apartment in an otherwise functional building counts as this, but not The Alleged House. Also compare Cardboard Box Home, the more extreme version. If someone lives in a derelict building that's not even a residential structure, it may overlap with Non-Residential Residence. See also the Lonely Bachelor Pad, which may devolve into this if said bachelor is very uncaring or apathetic.

Similar tropes include Bad Bedroom, Bad Life, where the poor state of a character's bedroom specifically reflects their life struggles; Bath of Poverty, for when the bathroom specifically is rundown; House-Hunting Montage, which often shows houses like this; and Neglected Garden, for when a depressed character isn't taking care of their garden.