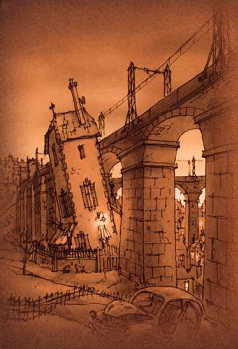 Jake: How often does the train go by?
Elwood: So often that you won't even notice it.
— The Blues Brothers
Advertisement:

What's the foremost sign that you're living in a really cheap urban apartment? Every time the train passes, the whole building shakes. Look out your window, and the 2:05 goes by. It can make sleeping pretty difficult. But hey, at least it has a view!

In the US, right up to the present day, apartments right next to active railroad tracks are usually the poor (and sometimes shady) part of town. People with money don't want to or need to live close enough to hear the trains passing by and rattling the building. This is also quite literally where the expression "Wrong Side of the Tracks" comes from, which referred to the direction prevailing winds drifted the smoke from steam locomotives, where rents were even LOWER.

This is slowly on its way to becoming a Discredited Trope as real-estate values go up at close proximity to a station in urban settings, so assuming that the apartment itself is not too run-down, living near public transport is actually very desirable. Tokyo, being a massive space-starved city with a vast rail network, has taken this to its logical conclusion: Several over-street routes have small shops built into the arches of the supports.