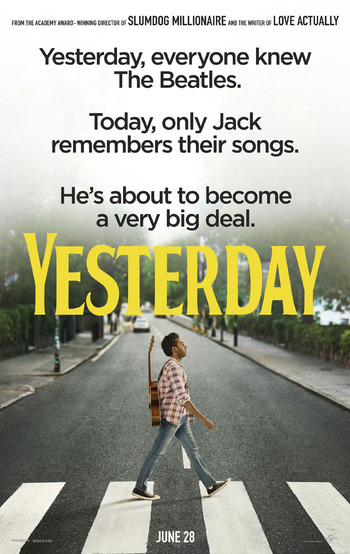 "Sometimes it feels like someone else has written all the songs."
Jack: Do you genuinely not know who The Beatles are?
Ellie: Genuinely.
Jack: Then I’m in a really, really, really complicated situation.
Advertisement:

Yesterday is a musical comedy directed by Danny Boyle and written by Richard Curtis, the film marks the feature debut of EastEnders star Himesh Patel as Jack, joined by Lily James as his childhood friend Ellie and Kate McKinnon as his ruthless manager Debra.

Jack Malik has wanted to be a musician his entire life. But after years of never getting anywhere, he finally gives up, only to be hit by a bus during a mysterious worldwide power failure. Upon waking up, everything seems the same, but then he plays "Yesterday" for his friends and family... and they all assume he wrote it! Somehow, Jack has landed in a world where The Beatles never existed, enabling him to truly make a name for himself as he passes off one of the greatest music catalogs of all time as his own one by one.