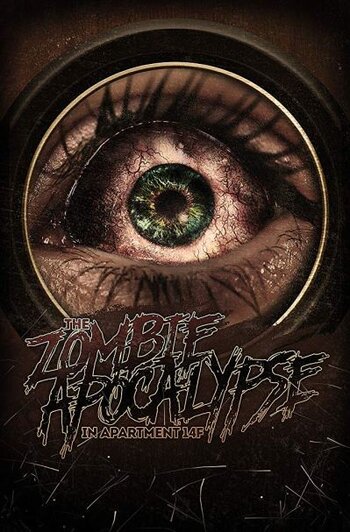 The Zombie Apocalypse In Apartment 14F is a Canadian Comedy Film by Gilbert Allen.

Raymond (Griffin Cork) and Joey (Ben Francis) are a pair of stoners who were invited over to their drug dealer friend Bradly Thomas' (Wesley Sellick) new apartment so he could show it off to them. One thing he shows off to them is his drone, which they all decide to use to spy on the call girl who lives one floor below them (Jolene Hexx).

While Bradly goes off to deal with something, Raymond wants to zoom in despite Bradly not wanting them to touch his drone. Raymond and Joey fight over the controls, causing the drone to get stuck in a net one floor down, and end up getting a disturbing shot from the floor below the woman. It seems that, on the 14th floor of the apartment, people are being attacked and eaten by zombies, much to their shock. Bradly tries to regain his drone, and then falls to his death.

Now Raymond and Joey are stuck in Bradly's apartment, with Raymond watching the call girl (whom he named Red) from Bradly's drone, trying to survive in what they assume is a Zombie Apocalypse.

The Zombie Apocalypse In Apartment 14F contains examples of: