Film / You, Me and Dupree 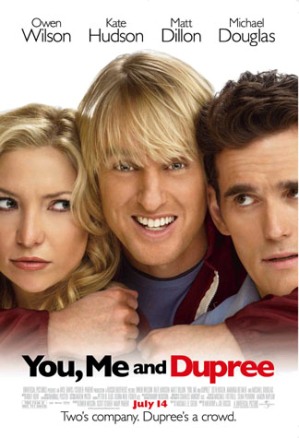 You, Me and Dupree is a 2006 comedy film directed by Anthony and Joe Russo, and starring Owen Wilson, Matt Dillon and Kate Hudson.

Newlyweds Carl (Dillon) and Molly Peterson (Hudson) have just moved into their new house. One night, stopping at a bar, however, Carl catches his best friend; the childish, immature, free-spirited Randolph "Randy" Dupree (Wilson) languishing around. It turns out that because Dupree did not have leave to attend Carl and Molly's wedding, he lost his job, was thus unable to pay his rent, and is now homeless. Carl allows him to stay and his and Molly's new house until he gets back on his feet.

Almost immediately, Dupree is annoying the hell out of them both and when Molly tries to hook him up with Mormon librarian Mandy; they come home to find him having sex with her in their living room using butter as lubricant, after which their couch ends up set on fire. Finally, they can stand it no more and throw him out.

After finding Dupree out in the rain, they let him back in again, but insist he gather his act together. He complies. Alas, Carl is starting to drift away, crushed by pressures at work pertaining to his boss/father-in-law Bob Thompson (Michael Douglas), who despises him. The lonely Molly gets to know the freshly-reformed Dupree, and Carl begins to suspect they're having an affair...

Didn't do well with critics (21% on Rotten Tomatoes), who considered it flat and cliched, but was a relative box office success.