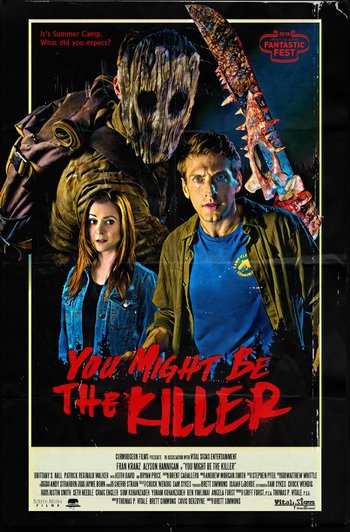 You Might Be the Killer is an unrated horror-comedy which was released on the Shudder streaming network in 2018 and came out on DVD and Blu-Ray in 2019.

The movie has its origins in a twitter thread between authors Chuck Wendig and Sam Sykes, where they roleplayed as a camp counselor being pursued by a serial killer calling a friend for advice about how to survive. The idea was then developed into a film by director Brett Simmons, with actors Alyson Hannigan and Fran Kranz in the leading roles.

The plot of the film concerns Sam (Fran Kranz), the hapless lead counselor at Camp Clear Vista, getting caught in the middle of a massacre carried out by a Vorhees-like masked killer. He calls his horror-loving friend Chuck (Alyson Hannigan) for advice on how to survive; but after hearing the details of his situation, Chuck posits that Sam may in fact himself be the killer.

The twitter thread which inspired the film can be found here

, but be advised that it will spoil many of the movie's twists.