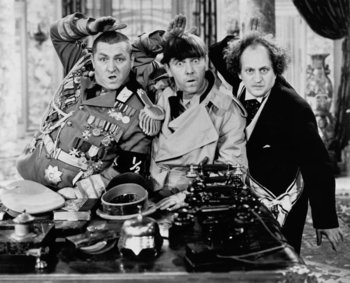 "Hail-hail Hailstone! Wahoo!"
"A Dictator? Why, he makes love to beautiful women, drinks champagne, enjoys life and never works. He makes speeches to the people promising them plenty, gives them nothing, then takes everything! That's a Dictator."
— Mr. Amscray
Advertisement:

This 1940 short starring The Three Stooges was, literally, the first movie ever to mock the Nazis.

Set in the country of Moronika, three men plot to overthrow their king and appoint a dictator. Their choice is a paperhanger named Moe Hailstone. With Curly as his Field Marshal and Larry as his Minister of Propaganda, the boys take control of the country. The citizens are unhappy and drive Hailstone out of power.

This was followed by I'll Never Heil Again. Other Hollywood artists started attacking the Nazis in 1940: Charlie Chaplin did it with The Great Dictator and MGM did it with The Mortal Storm. But the Stooges did it first.