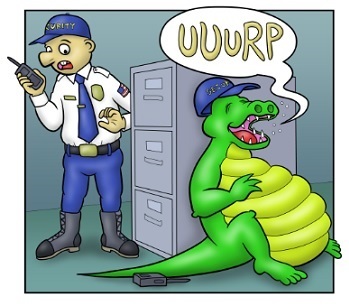 So a monster just ate someone, maybe even without chewing, or things cut away just before things got...messy. But how to make it clear the victim is gone for good, without getting gory?

Easy, just have the monster burp! Bonus points if it politely apologizes for bad table manners.

Spit Out a Shoe without the need for clothing, though the two tropes often overlap. Usually Played for Laughs. Thankfully, there are non fatal cases of this trope.