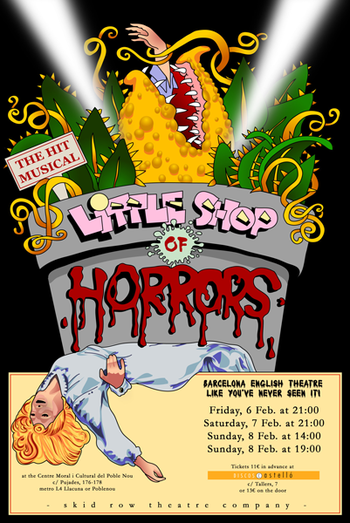 "Feed me! Feed me!...Feed me, Seymour!"
On the twenty-first day of the month of September, in an early year of a decade not too long before our own, the human race suddenly encountered a deadly threat to its very existence. And this terrifying enemy surfaced – as such enemies often do – in the seemingly most innocent and unlikely of places...
Advertisement:

A musical reimagining of the 1960 Roger Corman film The Little Shop of Horrors, made by Howard Ashman and Alan Menken, which debuted in 1982, loosely adapted from Corman's film. The musical was subsequently turned into a 1986 film directed by Frank Oz.

The story revolves around Mushnik's Skid Row Florists and the three people who work there: Mr. Mushnik, the proprietor, and his two assistants, Seymour and Audrey. Seymour loves Audrey, but hasn't told her because he's a poor orphan with no future to offer her. Audrey dreams of meeting a nice man who'll love her for herself, but believes it will never happen. Due to her lack of self esteem, she's willing to date a rich but thoroughly unpleasant guy, Orin Scrivello, a motorcycle-riding dentist who calls himself "the leader of the plaque."

The shop is on its last legs: there's nothing in the till but cobwebs and dust. And then Seymour finds a strange and interesting plant, which he dubs the Audrey II, and persuades Mr. Mushnik to display it in the shop window. Audrey II proves to be a customer magnet: people come to look at it, and always buy something before they leave. As its fame spreads, the shop receives larger and larger commissions, and Seymour starts receiving offers for national magazine interviews, lecture tours, even his own TV show.

But there's a catch: The plant thrives on human blood, and will die without it. At first, Seymour can keep it satisfied with his own blood, but as it grows larger it demands more than a person can give and live. But, you know, there's that repulsive boyfriend of Audrey's — surely nobody would miss him if he were to... disappear...

The original musical was famous for its "Everybody Dies" Ending, with the moral of "Don't feed the plants" serving as a fitting metaphor for avoiding temptation, and deals that sound too good to be true. The film version follows the stage version fairly closely except for a Focus Group Ending in which the Audrey II is defeated and Seymour and Audrey survive to live happily ever after, though the originally shot and Truer to the Text ending was restored for the later Director’s Cut. It was also one of the first mainstream musicals with a rock n roll-style score that wasn't specifically composed to fit its story.note Though the movie ambiguously sets it in the early-to-mid sixties.

The film version subsequently resulted in an animated series called Little Shop, created by Frank Oz, which aired in 1991. It was set in a High School, with school-aged Seymour (who's no longer an orphan and has a hypochondriac mother, much like the original 1960 film) and Audrey (who was rewritten to be Mr. Mushnik's daughter who's obsessed with becoming a firefighter) dealing with the usual sort of high school comedy plots, with the dubious assistance of a toned-down plant which was merely carnivorous rather than a "humanitarian."

Specific productions have added examples of: