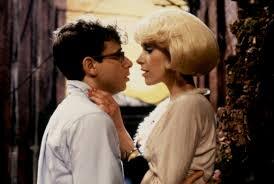 Suddenly Seymour is standing besides you

Both Stage And Film