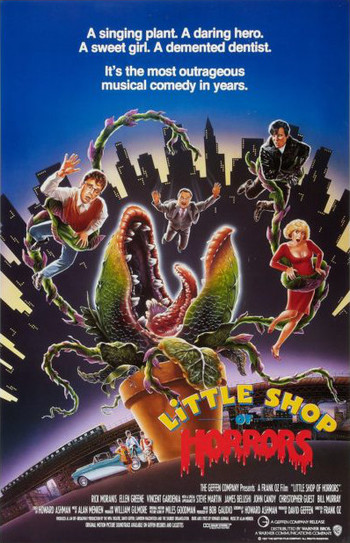 Little Shop of Horrors is a 1986 film adaptation of the musical of the same name, which was in turn loosely adapted from the original 1960 film, itself loosely based on the book Green Thoughts. It starred Rick Moranis in his last singing role, which in turn inspired a revival of the musical. It is Frank Oz's first film as a solo director (he'd co-directed his previous films with Jim Henson) and his first outside of the Muppet label, and would start his line of subsequent comedy films. It's also Howard Ashman's only credit as a screenwriter.

The film follows the stage version fairly closely, except for a Focus Group Ending in which Audrey II is defeated and Seymour and Audrey survive to live happily ever after, filmed after the original play's Downer Ending (where the plant wins and Audrey and Seymour are eaten) did horribly with test audiences. On October 9, 2012, the director's cut was released, featuring the original, darker ending which is closer to that of the musical and digitally remastered. This ending was only available in black-and-white and with limited sound effects until in 2012 it was fully restored with color.

that Warner Bros. had hired Greg Berlantinote director of Life As We Know It, and producer for the "Arrowverse" and other CW shows to direct a remake, to be written by Matthew Robinson.

Not to be confused with Pet Shop of Horrors.

The film provides examples ofnote tropes from the original stage production can be found on its page: