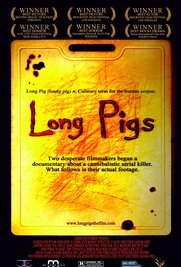 "Two desperate filmmakers began a documentary about a cannibalistic serial killer. What follows is their actual footage."
Advertisement:

Two documentary filmmakers are desperate for work. They soon discover their big break: a cannibalistic Serial Killer willing to be filmed! All seems to be going well. However, our protagonists are starting to get second thoughts...