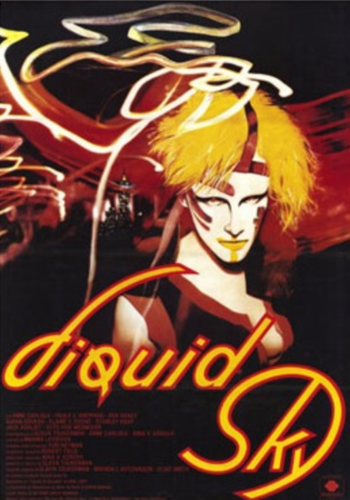 Liquid Sky is an incredibly strange 1982 science fiction film. The plot revolves around Margaret (Anne Carlisle), a bisexual model and performing artist living in a neon-lit, New Wave apartment with her partner and fellow performance artist, Adrian (Paula E. Sheppard) - who is also hoarding and dealing a substantive amount of heroin. Besides Adrian, Margaret has a number of other sexual encounters with the often sleazy men and women she meets through the local alternative nightclub scene, as well as a tense on-and-off rivalry with the androgynous model Jimmy (also Anne Carlisle), an addict living high off of Adrian's supply.

Unbeknownst to the protagonists, aliens have landed on their rooftop, and are inhabiting Margaret's mind and body in order to feed on human pleasure from sex and drugs. Things then begin to get much weirder - and much, much deadlier for everyone involved.

One of the signature features of Liquid Sky is its abrasive, dissonant experimental-electronic musical score, which sporadically appears as a re-release (usually with a steep price of sale) from various alternative record labels.

The film - both its music and its visuals - went on to become an inspiration for much of the contemporary Drag and Fetish scenes, as well as several genres and scenes of electronic music including Electroclash and Minimal Synth.

Tropes Found In This Film Include: