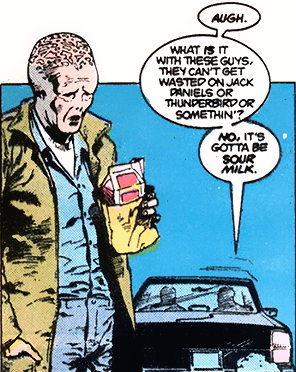 "As far as [Yi Min] was concerned, ginger was just a condiment ... But when Ssofeg tasted it, he might have died and gone to the heaven Christian missionaries always talked about in glowing words."
— Worldwar: In the Balance
Advertisement:

Bizarre Alien Biology is a staple of Speculative Fiction. One of the common ways of showing it off is to show the oddity of extraterrestrial diets, especially in regards to Earth food. Perhaps vinegar is toxic to these guys, but they need regular infusions of arsenic to survive?

With this in mind, it's no surprise that certain mundane-to-us substances might make them a bit... funny.

Ordinary substances being intoxicants for aliens (or similarly otherworldly beings) is very likely to come up in stories that feature them. It can be serious; for example, exploring the ramifications of ginger addiction. Of course, it can also be Played for Laughs, because it's funny to watch someone get trashed on gummi bears.

You can also see the equivalent in fantasy fiction; it's fairly common for certain kinds of vampires to react to human blood as though it were a drug.

Subtrope of Drunk on Milk. Compare Fantastic Drug and Spice of Life. See also Klingons Love Shakespeare, I Can't Believe It's Not Heroin! and Mars Wants Chocolate. Compare and contrast No Biochemical Barriers. Not to be confused with High on Catnip which is about actual catnip acting as a drug to (usually feline) characters. Sister Trope to A.I. Getting High. If it's not intoxicating, just really tasty, see Aliens Love Human Food. See Far-Out Foreigner's Favorite Food.

As it happens, Japanese tea has the exact same makeup as "Meroro Fumofumo". Completely normal to a human, but to a Crystalian like Mabushiina, it's very strong alcohol that renders her completely off her face with a single glass.

As it happens, Japanese tea has the exact same makeup as "Meroro Fumofumo". Completely normal to a human, but to a Crystalian like Mabushiina, it's very strong alcohol that renders her completely off her face with a single glass.