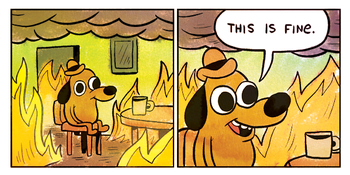 Elie: Tio?! The sun makes it hard to see, but your face... It's so pale!
Tio: I told you, I'm fine. I'm just feeling a bit unwell, that's all.
Randy: Surely you can see the big contradiction here.
— The Legend of Heroes: Trails from Zero
Advertisement:

This trope is when a character lies that they're "fine", "okay", etc., and yet there's absolutely no way anyone with a functioning brain could believe them.

Maybe they're bawling their eyes out, maybe they're visibly injured (see I Can Still Fight! and Major Injury Underreaction) or sick (see Definitely Just a Cold), drunk, or whatever, but it's clear they're not fine.

There are several reasons why they might be lying—they might not want to be excluded from something that they would be if someone knew they were sick/injured/drunk/whatever, or they might not want other people to worry, or maybe they're a Stepford Smiler who's terrible at hiding their real emotions, or the reason they're not OK has to be kept secret. They could also be trying to convince themselves that they're fine as well as the person they're speaking to.

In the cases of crying, they might blame it on Sand In My Eyes or try to pretend it's Tears of Joy when it clearly isn't. Claiming that they're "just tired" is a common excuse for any out-of-whack behaviour, but if they really are tired, and it's obvious, expect them to deny that. They might also claim they're just hungry or thirsty, even though their symptoms are not those of hunger or thirst. If the lie has "Do I look X to you?" as its format, someone might respond in the affirmative, perhaps with a Blunt "Yes". Depending on the way they respond, it could lead to I Resemble That Remark!.

Sub-trope of Blatant Lies. Compare and contrast I'm Okay!, for when they really are okay but if not for the Rule of Funny, they definitely wouldn't be. If someone is obviously not fine based on what we know, but it's plausible deniability to the other characters, that's Dramatic Irony. If they act as though they are truly fine, see Dissonant Serenity. If they got shot, and really are fine but shouldn't be because the writer got a fact wrong, that's Only a Flesh Wound. If they truly think they're fine, only to instantly become obviously not fine, that's a variation on Instantly Proven Wrong. If it's the narrator who claims the character is fine when they're obviously not, that's an Unreliable Narrator. See also Lying to Protect Your Feelings, Major Injury Underreaction, and Implausible Deniability.

Heffer tries to convince his mother over the phone that he's doing fine living on his own, with all evidence to the contrary.

Heffer tries to convince his mother over the phone that he's doing fine living on his own, with all evidence to the contrary.