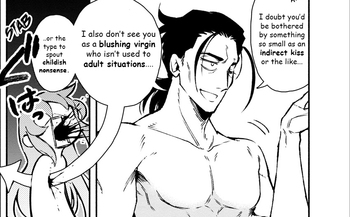 In all fairness, she is the white saintess of her church and one of the top people in her country so she probably hasn't had the opportunity to meet men. Not that she wouldn't want to.
[Xander has just walked in on Spike groping Buffy]
Xander: Good Godfrey Cambridge, Spike! Still trying to mack on Buffy? Wake up already. Never gonna happen! Only a complete loser would ever hook up with you. [Buffy looks insulted] Well, unless she's a simpleton like Harmony, or a... or a nut sack like Drusilla-
Buffy: Hey! You really need to get Dawn off to school. Let's go... go fetch her, okay?
— Buffy the Vampire Slayer, "Gone"

Sometimes, whether or not the universe is realistic, some actions are deemed either ridiculously dangerous or utterly idiotic. Nothing to be really proud of in any case. The characters talk about such actions and, soon enough, Alice will wonder out loud (probably sniggering) − "Who would be stupid enough to do that?"

What she doesn't know is that Bob, to or in presence of whom she said it, actually did the stupid thing in question. Whether he succeeded or failed miserably, he will either not answer anything or pretend to agree with Alice with an embarrassed expression; he may even be personally proud of it. If the viewer knows it, A Smile Ensues: it's a form of Continuity Nod. What makes this trope funny is the fact that Alice says it totally innocently, without any clue she is mocking someone within hearing range. Hence the Oblivious Mockery. In some cases, Bob may reveal out-loud that he did said action, and may or may not try to justify himself. Basically, this follows this kind of pattern:

Alice: Did you know some people actually try to cook the rice without adding water first?
Bob: Oh come on, that's an urban legend, nobody can be that clueless and incompetent! Right, Carol?
Carol: Er... yeah, totally, I can't imagine anyone doing that... ahahaha... hem...

Can overlap with an in-universe Old Shame or be a type of Dramatic Irony.

Compare Oblivious Guilt Slinging, Insult Friendly Fire, Innocently Insensitive, I Resemble That Remark!. Contrast Noodle Incident, where the characters vaguely talk about an event they know but the viewer doesn't. Contrast and compare Who Would Be Stupid Enough?, when Alice tempts fate and is proven right away that someone is stupid enough, and Schmuck Bait. See also It Will Never Catch On.

The inverse trope is Right Behind Me, when Alice talks dirty about Bob without knowing he's, well, right behind her. Compare I'm Standing Right Here, where the person is still right there, but the mockery is less oblivious.