Spoilers for Frozen II will remain tagged as usual. However, being a sequel to Frozen, this page does contain unmarked spoilers for that film. You Have Been Warned! 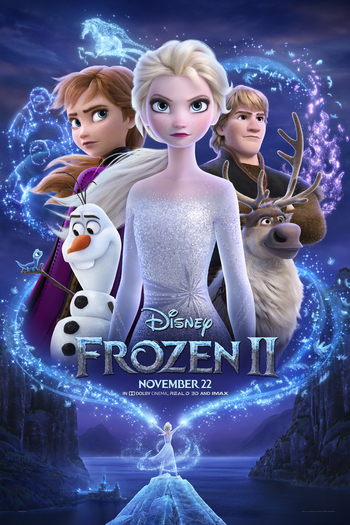 Let go of the past. Answer the call.
"Elsa... the past is not what it seems. You must find the truth. Go north across the enchanted lands and into the unknown."
— Pabbie
Advertisement:

Frozen II or Frozen 2note both numeral renderings of the number two have been used by Disney, though the logo uses the Roman numeral is the sequel to Frozen and the second full-length feature film of the Frozen franchise, the 58th entry in the Disney Animated Canon, and the first non-direct-to-video sequel to one of its musical films. Set three years after the first film, Queen Elsa, Princess Anna, Kristoff, his pet reindeer Sven, and talking snowman Olaf leave the kingdom of Arendelle and face dangers in a new land, discovering more about magic (including just how and why Elsa got her powers) and the history of Arendelle.

It was released on November 22, 2019, making it the last animated Disney film of the 2010s. It was dubbed into 46 languages, including Northern Sami. This makes it the third Disney film to receive a special dubbing dedicated to the culture that inspired it, following the Zulu dub of The Lion King and the Tahitian, Māori, and Hawaiian dubs of Moana.

A making-of series, Into the Unknown: Making Frozen II, premiered on Disney+ in June 2020. An animated series, Olaf Presents, expands on the scene of Olaf recapping the events of the first film by having him portray the events of other Disney Animated Canon films in a similar manner.

open/close all folders
Tropes A to C
Advertisement:
Tropes D to G
Tropes H to M
Tropes N to R
Tropes S to Z
"When all is lost, then all is found."
Feedback

The Honest Trailer for Frozen 2 can't help but notice all the forced call-backs to the original.

The Honest Trailer for Frozen 2 can't help but notice all the forced call-backs to the original.