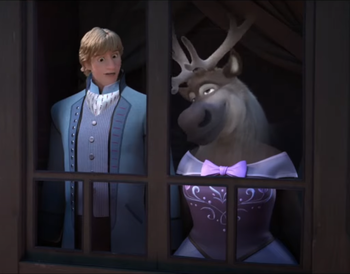 Don't they just make the cutest couple?note Well, sure, but a couple of what?
As a Moments subpage, all spoilers are unmarked as per policy. You Have Been Warned.
Advertisement:
open/close all folders
Princess Anna
Queen Elsa
Kristoff
Olaf
Advertisement:
Everyone Else
Meta