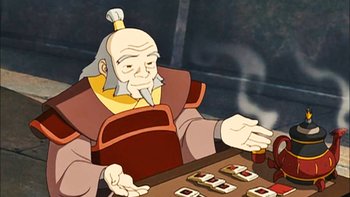 "Why don't you enjoy a cup of calming jasmine tea?"
Advertisement:

Have you ever noticed that guy who never really gets mad or excited, or shows any emotion outside nonchalance? Meet the Mellow Fellow. These people are easy-going and content with their position and... nearly everything around them. Often a benevolent or at least affable character due to rarely being confrontational.

What differentiates this character type from his more serious cousin The Stoic is that while the latter rarely conveys real emotions outside blunt seriousness, the Mellow Fellow is usually more along the lines of being very positive and relaxed in nature, to the point it nulls out any other emotion. They are laid-back and not here for conflict and dealing with unnecessary drama. Usually, this trait has the side effect of making Mellow Fellows seem rather slow or dim. Though don't always mistake their nonchalant attitude in life for idiocy or carelessness, as they can be incredibly perceptive, intelligent, or even show a more serious side when they decide it's a Matter of Life and Death and get down to business.

Their inability to take offense very frequently gets exploited and makes them an Extreme Doormat. They are often very flexible, used as The Chew Toy, due to their ability to suffer endless abuse without expressing much harrowing pain to the ordeal. Don't think one is incapable of biting back, however; after all, you can still be assertive without losing your cool.

Characters with this trait are often Phlegmatic in Four-Temperament Ensemble, and their Character Alignment is neutral on the law-chaos axis (i.e. Neutral Good, True Neutral, or very rarely Neutral Evil). Compare with the Nerves of Steel, who's calm even under pressure, and Dissonant Serenity, for when someone is oddly undisturbed by a disturbing situation. Contrast the Nervous Wreck, who has likely never known the concept of "calm" in their entire life, the Large Ham who's incapable of being poised and mellow, and the Drama Queen. A possible cause of this is a character being The Stoner.

The pod of manatees are slow, relaxed, and speak in surfer slang.

The pod of manatees are slow, relaxed, and speak in surfer slang.