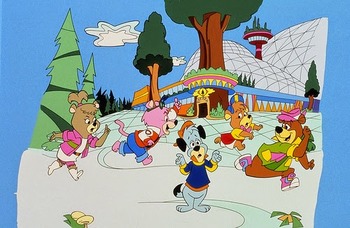 Hanna-Barbera's answer to Saved by the Bell and Muppet Babies, a Saturday Morning Cartoon that ran on NBC from 1991-92. It features Yogi Bear, Boo Boo Bear, Snagglepuss, Huckleberry Hound, and Cindy Bear as teenagers solving mysteries in "Jellystone Mall" under the watchful eye of Officer Smith (a younger Ranger Smith), while "Dickie" (a teenage Dick Dastardly) would try to foil them.

Widely panned for effectively being the real-life version of Poochie the Dog - which is to say, an embarrassing attempt at being hip and trendy that just winds up making everyone involved look more out of touch and hopeless. The show is drenched in the most early 90's aesthetics possible, and it featured such timeless references as Magilla Gorilla being turned into Magilla Ice. It's often used as one of the prime examples of how an attempt to reboot something for modern times can wind up taking something that was timeless and turn into a dated punchline.

It was such a commercial failure, it killed off any chance of Yogi getting another series (at least until the 2010 film reboot, and then Jellystone! after that in 2021) and is seen as the reason NBC stopped airing Saturday morning cartoons (the huge success of Peter Engel's live-action teen shows Saved By the Bell and California Dreams and failure of animated stablemate ProStars didn't help).