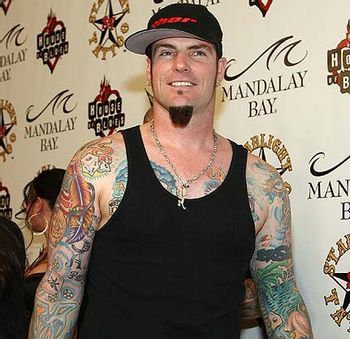 Vanilla Ice, real name Robert Matthew Van Winkle (born October 31, 1967, not to be confused with Rip Van Winkle), is a rapper born in Dallas, Texas, and raised in Texas and South Florida, who is best known for his 1989 hit "Ice Ice Baby", which samples the main riff from Queen and David Bowie's "Under Pressure". Between the ages of 13 and 14, Van Winkle practiced breakdancing, which led to his black friends calling him "Vanilla Ice." Van Winkle wrote "Ice Ice Baby" at the age of 16, basing its lyrics upon his experiences in South Florida.

In 1987, Van Winkle met Tommy Quon at his Dallas night club City Lights. Upon seeing Van Winkle's performance, Quon saw commercial potential in his rapping and dancing skills, and offered him a contract with his management company, Ultrax. Van Winkle signed a contract with Ichiban Records in 1989, and released his debut album, Hooked. "Play That Funky Music" was released as the album's first single, with "Ice Ice Baby" appearing as the B-side. When a disc jockey played "Ice Ice Baby" instead of the single's A-side, the song was more popular than "Play That Funky Music". Quon financed $8,000 for the production of a music video for "Ice Ice Baby", which received heavy airplay by The Box, increasing public interest in the song. Van Winkle later opened for EPMD, Ice-T, Stetsasonic and Sir Mix-a-Lot on the Stop the Violence Tour.

However, Van Winkle's success did not go without drama. After signing with a larger label, SBK, they paid him to adopt a more commercial appearance, which was the subject of frequent mockery among his peers. Quon attempted to expand Van Winkle's success into film, with mixed results. He had a cameo in Teenage Mutant Ninja Turtles II: The Secret of the Ooze, which was a success (but not really because of Ice). Ice also starred in the vehicle Cool as Ice, which bombed at the box office and earned him a Golden Raspberry Award for Worst Actor, though today it's earned something of a So Bad, It's Good status. SBK and Quon also pretty much ruined his reputation by publishing a fake autobiography without his knowledge which claimed a violent gang life that he didn't participate in. Van Winkle soon found himself having to answer questions about claims he never made, and the inconsistency between the label's biography and Van Winkle's actual statements led to further criticism.

Van Winkle attempted to take control of his career by releasing the more gangsta-influenced Mind Blowin, without any "image", with harder lyrics, and a live, funk-oriented sound. The album turned out to be a disaster for him - the label went bankrupt during the album's release, it was poorly received by both critics and the general public, and it did not even chart on the Billboard 200. Van Winkle began using harder drugs than previously, and attempted suicide through a drug overdose. When he survived, he was inspired to not only clean up his act (he now only smokes marijuana), but to remove himself from the public spotlight completely.

After playing in a couple of Miami grunge bands, and trying to move toward a more rock oriented sound, he teamed up with producer Ross Robinson and releasing the album Hard to Swallow, which earned him a new fanbase which enjoyed his new sound. Since then, he has had some success on the independent music scene, with less mainstream albums featuring a style that he refers to as "Metal Molten Hip Hop". He's even had quite a few appearances in film and TV, including The Surreal Life (which included a hilarious scene where he antagonized Gary Coleman), The New Guy and Big Money Rustlas.

Most recently, he has starred in The Vanilla Ice Project on the DIY network which is... a home improvement show. As it turns out, Robert's other pastime to rapping is home improvement and real estate (and he's pretty good at it; it's his other job when he isn't touring). His other other pastime is extreme sports, specifically Motocross - he even won a few championships. The Vanilla Ice Project has been successful enough to be picked up for a second season - as a result, expect more odd occurrences of a hardcore rapper saying things like "Mmm. They smell great. I love flowers. They're great."

Van Winkle has been called "The Jackie Robinson of Hip-Hop" by Public Enemy leader Chuck D, and was one of the earliest examples of a white rapper achieving a large level of success, after the groups Beastie Boys, 3rd Bass and House of Pain, but preceding successful solo acts like Kid Rock and Eminem. Having been raised in both Dallas and Miami, Van Winkle is the most successful rapper from these cities. "Ice Ice Baby" was so popular that it has remixed multiple times, and was the subject of a cover by Irish pop duo Jedward, as a mash-up with "Under Pressure", the song that it famously sampled. In 2011, he signed to Psychopathic Records. Critics also liked his performance as Captain Hook in a pantomime stage production of Peter Pan.

His greatest legacy is perhaps that all new white rappers inevitably get asked, "Who do you think you are, Vanilla Ice?"

Yo man, let’s get out of here. Word to your mother.