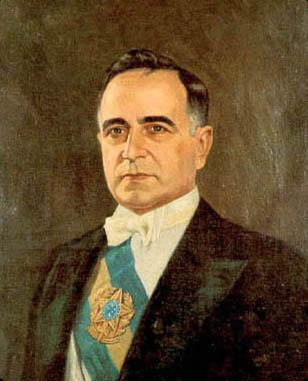 The Father of the Poor

Getúlio Dornelles Vargas (19 April 1882 – 24 August 1954) was a Brazilian politician that served as President of Brazil during World War II, he governed for two terms, the first one for 15 years as a dictator and the second one for 3 years after being re-elected by direct vote until his suicide. He is usually hailed as the father of modern day Brazil (either him or Juscelino Kubitschek) and has a very mixed legacy, not unlike the Brazilian Military Regime that happened way after his death.

Following Emperor Pedro II's overthrow, a Republic was established by the Brazilian army which was a Banana Republic initially controlled by military members until it became an oligarchy after the election of its first civilian candidate Prudente de Morais. This period could be easily described as a People's Republic of Tyranny since democracy was all in name: the power was decentralized between "coroneis" (colonels) who served as Feudal Overlords over rural areas that pressured the populace to vote in their candidates of preference to protect their interest - the most dominant states where this practice happened were São Paulo and Minas Gerais, establishing the "coffee with milk" policy (named after the two main products from these areas). It was in this period where disorder and anarchy were at an all-time high and figures like cangaceiro Lampião rose to prominence.

The oligarchy came crashing down after the Great Depression, which affected Brazil much harder than the United States due to its heavy dependence in exporting and market loans, and as such, political and economic reform were needed. Enter Getúlio Vargas, the populist governor of the Rio Grande do Sul state who came from an oligarchical but was an economical nationalist who favored industrial development and liberal reforms. With the help of an coalition of diverse minded individuals, Vargas staged an coup that ousted the president Washington Luiz and placed himself into power.

Unfortunately, this coalition lacked an cohesive vision besides an broad idea of "modernization" which made his idea of governing difficult. This pushed Vargas to alter his policies to whatever ideology was convenient for him at the time, which is what marked his long career. He alternated between being a economical libertarian, an authoritarian modeled after fascist regimes in Europe, an Marxist-friendly populist and so forth. The most significant example of this was his relation two separate political parties: the Communists and Integralists. The latter were an far-right Catholic party founded by Plinio Salgado and influenced by Fascism for opposing Marxism and liberalism, but also denounced racism as it sought to "unite all races and people into one spirit", and the former was headed by Luis Carlos Prestes, an Marxist militant that sought to implement communism in Brazil. Both parties were allied with Vargas during the 1930 Revolution, but they became disillusioned with him due to his inconsistent policies to secure their support.

However, when the time came for his term to end, Vargas seized emergency powers to establish the New State, dissolved congress, abolished all political parties (including both the Communists and Integralists) as "subversive" and effectively became a dictator. While his governmental model was definitely authoritarian, he turned against the Integralists who had once supported him against the Communists and through them, established friendly relationships with the Axis Powers. However, he turned down a formal invitation by Adolf Hitler to join them which placed them in an awkward situation. When World War II broke out, Brazil was initially neutral as it didn't want to back either side without provoking the other. By the time the USA entered the war, the Americans enacted an "good neighborhood" policy to sway Brazil to their side - the alternative would have been "Plan Rubber", an secret plan poised to invade Brazil in case it sided with the Nazis, but this plan never came into fruition, as Vargas authorized the USA to build bases along their coast. This action angered the Germans who retaliated by sinking Brazilian merchant ships and declaring war on the Axis Powers (on a side note: many Brazilian conspiracy theorists believe the USA was actually responsible for this action, and many still say it albeit facetiously... Hopefully).

Brazil's entry in the war changed Vargas' policies dramatically, as he began to drop his authoritarian position for more liberal ones in hopes of appeasing the Allies. He released the political prisoners from their cells and implemented minimum wage, maternity leave, paid vacations and many other things to improve the worker's lives, though admittedly they were very slow to be enforced. Even his own political rival Luis Carlos Prestes lauded him for this, which didn't go so well for his fellow Communists who abandoned his party as result. Came 1945 and it was decided it was time for him to step down.

The New State left Brazil reinvigorated with the industry strong and growing, but his successor Eurico Gaspar Dutra put it all to ruin by protecting foreign interests and distancing himself from the reforms Vargas had enacted. Attempting to fix the mess Dutra left, he returned to politics once again and this time was legitimately elected by the people as President almost unanimously. However, while Vargas enjoyed a great deal of popularity by his people, he now made enemies with Brazilian conservatives and right-wingers since Dutra was an army general and they disliked the nationalist reforms they enacted since they preferred dependence on outsiders. After several assassination attempts and the increasing possibility that a new Banana Republic would be established, Vargas committed suicide rather than let his enemies do the job of killing him. He knew full well what he was doing: by turning himself into an martyr, the Brazilian people that loved him rioted when news of his death became public and effectively destroyed whatever support the conservatives would have from taking power. The following presidents would try to continue working on making Brazil more self-sufficient right up until the 60s when the Day of the Jackboot took place.

Today his legacy is very mixed; as an political leader, he defies all sorts of alignment and has critics and supporters on both right and left-wing. He was an avowed nationalist and anti-communist, but implemented several worker-friendly policies that made him very popular enough to build his own Cult of Personality and even some leftist figures such as former President Luiz Inácio Lula da Silva considers Vargas to be his personal hero. He had friendly ties with Nazi Germany, but fought on World War II against them on the Allies' side. He considered himself agnostic all his life, but had no problem allowing the Catholic Church to implement religious education on schools if it helped advance his agenda. If you ask an Brazilian how do they feel about him, it's possible that they will say both good and bad things at the same time. In retrospect, many would regard him more positively compared to the military regime, since he envisioned it coming and managed to stall it by a few years with his suicide. Some would call him a radical centrist dictator, one that switches allegiances just as easy to any ideology, but one thing is certain: he always had Brazil's wellbeing in mind and he was willing to sacrifice himself for it.