Film / Rebel Without a Cause 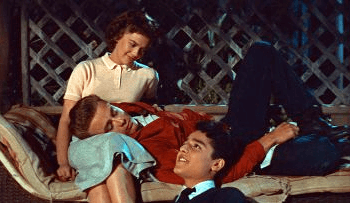 Rebel Without a Cause is a 1955 teen drama film directed by Nicholas Ray in which James Dean, Natalie Wood, and Sal Mineo deal with Angst. Notably averts the Teens Are Monsters mindset of the '50s era.

Dean is Jim Stark, a Troubled, but Cute 17-year-old with a messed-up home life. His mother (Ann Doran) prefers to move whenever a problem comes up rather than confront it and his father (Jim Backus) is a Henpecked Husband who lets her do as she pleases. As a result, the Starks are constantly moving around and have just arrived in Los Angeles as the film opens. At his new High School, Jim befriends John "Plato" Crawford (Mineo), an Ambiguously Gay innocent. Jim immediately finds himself up against Buzz Gunderson (Corey Allen), the local Jerk Jock, but takes somewhat more kindly to Buzz's girlfriend Judy (Wood). Needless to say, she later becomes Jim's girlfriend. Most of the movie takes place on a night after a chicken race gone horribly wrong.

There is a "Rebel Without A Cause curse". The film's three main stars (Dean, Wood, and Mineo) all met tragic deaths at a young age, Dean died before the film even opened.note Dean was 24 when he was killed in a car crash, Mineo was 37 when he was stabbed by a mugger and Wood was 43 when she was found dead at sea in mysterious circumstances.