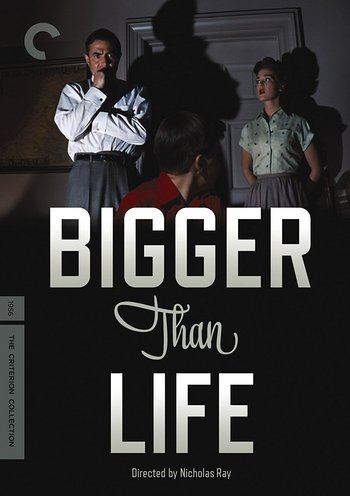 The film is based on an article for The New Yorker called "Ten Feet Tall", by the famous medical writer Berton Rouechénote Some of whose writings inspired House. It's one of the first films to deal with the problems of prescription drugs and its side effects.

Ed Avery (James Mason) is a teacher in a small American suburban town with a wife Lou (Barbara Rush) and son (Christopher Olsen). On the outside the family is a suburban middle class family, but on the inside they are struggling to make ends meet with Avery holding two jobs to provide for them, being both teacher and a taxi-cab operator. His working life takes a toll on him and he has a breakdown with the doctor noting that his condition would be fatal unless he takes a new drug cortisone but is cautioned to take it only in the prescribed doses. Ed, formerly quite sober and even a little morose, finds that the drug provides him a genuine "high" and he becomes progressively more confident and active in his family and workplace. This high is so pleasing to him that he starts experimenting with the dosage, and his friends, wife and son grow increasingly disconcerted at his new more unpredictable and random personality.

Not to be confused with Larger Than Life, the 1996 comedy where Bill Murray has to transport an elephant cross-country.