Series / The Adventures of Pete & Pete 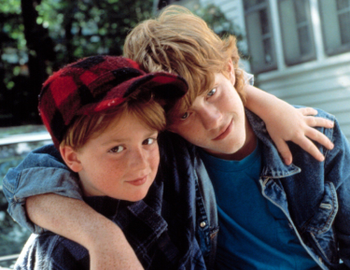 Left to right: Pete Wrigley, Pete Wrigley.
Ellen: Nickelodeon presents The Adventures of Pete & Pete! Starring Pete, Pete's brother Pete, and me—Ellen—as Pete's girlfriend—
Older Pete: Look, you're a girl, and you're a friend... but you're not a girlfriend!
—Narration that preceded every Pete & Pete short
Older Pete: This is [person/place/thing]. And this is [something associated with it].
—Narration that preceded nearly every Pete & Pete episode
Advertisement:

The Adventures of Pete & Pete, one of several sitcoms aired by Nickelodeon during the early 1990s, followed the misadventures of two brothers named Pete and their oddball family, neighborhood, school, and town in general. Will McRobb and Chris Viscardi, two members of Nickelodeon's marketing department, created the series in 1988 as shorts meant to advertise Nickelodeon in a more roundabout way. The commercials became a smash hit with viewers, which led to the production of five half-hour specials from 1991 to 1993. Nickelodeon eventually gave the show a full-series order; it ran for three seasons, ending in 1996.

The two titular brothers are named Pete Wrigley for reasons never explained within the series propernote the shorts mention their mom wanted their names to rhyme; Will McRobb once noted that, should you feel the need to ask, you are probably watching the wrong show. This is, after all, the same show where underpants inspectors are guardian angels, a metal detector can find an entire car (still in good condition!) buried at the beach, you can run to the Canadian border in four hours (or use a riding mower), and a mentally challenged man who speaks incoherent sentences and runs around in spandex pajamas is the personal superhero of the younger Pete Wrigley. Two brothers having the same name is arguably the least weird thing going on in the town of Wellsville.

Pete and Pete earned a devoted audience while airing alongside other live-action successes such as Salute Your Shorts and Clarissa Explains It All; it also garnered a Periphery Demographic in college-aged young adults—a demographic that Nickelodeon would not attract again in such large numbers until Invader Zim in 2001—who enjoyed the show's oddball quirkiness. It also helped pioneer a new style of sitcoms shot both on location and without a laugh track, which would become a common practice in the 21st century.

This is a TV Tropes page. And this is a list of tropes associated with The Adventures of Pete and Pete: