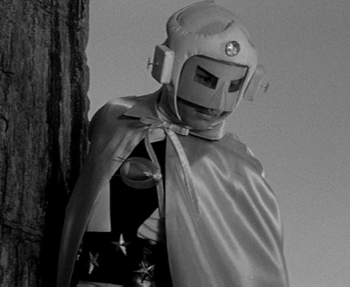 Your guns? Not gonna work on Prince of Space.
Advertisement:

A group of chicken-beak-nosed space men from the planet Krankor who refuse to wear underwear underneath their suits are led by their leader, Phantom, to invade Earth. But a superhero named Prince of Space (actually a bootblack in disguise) arrives to defeat the spacemen. His superpowers include a magical laser-proof grill lighter, reasonable skipping ability, and the knack for saying some variant of, "Your weapons are useless against me!", which is apparently quite accurate, although he dodges their laser blasts anyway, just to be safe. Although the weapons of the aliens are indeed useless against the Prince of Space, the Phantom continues to fight, and many plot twists (including capturing a group of elderly scientists) ensue.

Prince of Space was edited from two movies based on the 1958 tokusatsu series Yusei Oji — "Planet Prince" and "Planet Prince: The Terrifying Spaceship" — which may explain why the plot is a bit wonky. (Toei Company, who adapted the films from the original series, made several changes, such as a new costume for the main character.) The original TV series was a follow up to the extremely popular Moonlight Mask superhero series, though it also borrowed liberally from the Super Giant film serials of the time. The television series even had the main character wearing a costume identical to Super Giant. The Prince of Space character is somewhat iconic in his home country. The two films actually retell a story arc from the television series featuring the Phantom of Krankor.

Prince of Space contains examples of: