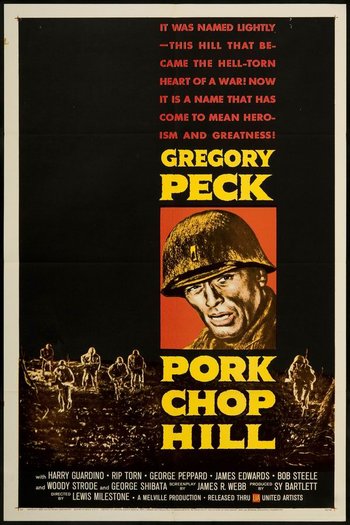 Pork Chop Hill is a 1959 Korean War war movie directed by Lewis Milestone (All Quiet on the Western Front) and starring Gregory Peck. Based on a nonfiction book by U.S. Army historian S.L.A. Marshall, it is the true story of the eponymous battle in the closing months of the war, so named because the mountain looked like a pork chop.

Lt. Joe Clemons (Peck), commanding officer of King Company, is given orders to attack Pork Chop Hill. His men are awaiting eagerly for news from the Panmunjom peace talks, and Clemons worries about the effect the orders will have on the company. The attack goes wrong from the start, and his men charge up the hill, taking heavy losses, and upon capturing the summit await a Chinese counterattack. Clemons, dealing with low ammunition, low morale and lack of flank support, wrestles over whether or not to send a request to be withdrawn.