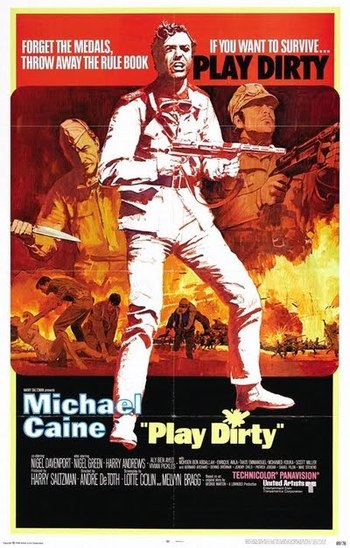 "War is a criminal enterprise. I fight it with criminals."
— Colonel Masters

The film is set during the North African Campaign in World War II. After several failed missions in German-held territory, Col. Masters (Nigel Green) wins a reprieve from the double-dealing Brigadier General Blore (Harry Andrews) by offering to destroy a Nazi fuel dump way behind the battle lines. Masters sends out a seven-man patrol headed by the mercenary Captain Cyril Leech (Davenport) but technically commanded by Captain Douglas (Caine), an oil supply officer previously attached to rearward duties. The twist: Every man in this patrol is a convicted criminal.

Released during the Vietnam War, the film is an extraordinarily cynical deconstruction of Elites Are More Glamorous, highlighting both the brutal behavior that's necessary to survive behind enemy lines and how little loyalty and ethics factor into special ops strategy. The patrol start out as Villain Protagonists and get worse as they go, with the biggest threat not being the Nazis but each other - and their unethical, self-serving commanders back at HQ who double-cross them at every opportunity

The film was a financial failure, with many at the time suggesting that its bleak tone and Evil vs. Evil is inappropriate for a movie set in World War II (which had decidedly clear-cut bad guys), while others myopically dismissed it as a ripoff of The Dirty Dozen (released a year earlier). Years after release it earned something of a cult following thanks to high profile advocates of the film like Martin Scorsese (who included it on a long list of guilty pleasures for the May-June 1998 issue of Film Comment).