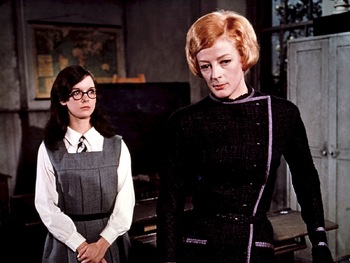 "I am in the business of putting old heads on young shoulders, and all my pupils are the crème de la crème. Give me a girl at an impressionable age and she is mine for life. You girls are my vocation. If I were to receive a proposal of marriage from Lord Lyon, King of Arms, I would decline it. I am dedicated to you in my prime. And my summer in Italy has convinced me that I am truly in my prime."
— Jean Brodie
Advertisement:

First published in 1961, The Prime of Miss Jean Brodie is probably the best-known novel by the Scottish author Muriel Spark.

Set at Edinburgh's conservative Marcia Blaine School for Girls in the 1930s, the novel deals with the eponymous schoolteacher and her 'set', whose futures and loyalties she seeks to control along Calvinist (and, increasingly, Fascist) lines. This is put against Miss Brodie's two romances — with Mr Lowther, Marcia Blaine's singing master, a church elder and bachelor; and Mr Lloyd, the school's art master, a married Roman Catholic with several children — as well as the attempts of the school's headmistress, Miss Mackay, to remove Brodie from her post.

The novel has been variously adapted into a play, a film, and a television miniseries. The best-known adaptation is probably the 1969 film, directed by Ronald Neame and starring Maggie Smith, who won a Best Actress Academy Award for her performance in the title role. The screenplay by Jay Presson Allen stays fairly true to the spirit of Spark's novel, but still makes quite a few changes, most notably pruning a few characters (reducing the 'set' from six to four and combining the ill-fated new girl Joyce Emily Hammond with the dim-witted Mary MacGregor), discarding the novel's use of prolepsis and flashback in favour of condensing its later incidents into single scenes, and not mentioning the post-school fates of the girls. The film also stars Maggie Smith's then-husband Robert Stephens as Teddy Lloyd, Gordon Jackson as Mr Lowther, Celia Johnson as Miss Mackay (for which she won a BAFTA) and Pamela Franklin as Sandy (in probably her best known role outside of The Innocents). The miniseries, produced for ITV in 1978, stars Geraldine McEwan (Marple) as Miss Brodie.

The 1969 film provides examples of: