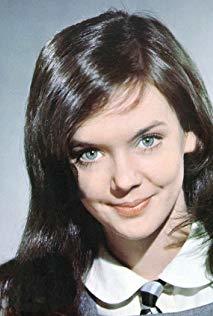 "Give me a girl of impressionable age and she is mine for life."
Advertisement:

Pamela Franklin (born February 3, 1950 in Yokohama, Japan) is a retired British actress who was active from the 1960s until the early 80s. During her relatively short but sweet career, she racked up an impressive list of credits. Many of them are among the most acclaimed British films of the time, or else Cult Classics.

She debuted as a child actress in The Innocents, alongside veteran actress Deborah Kerr, playing Creepy Child extraordinaire. Her unsettling performance of a Victorian girl who's either being possessed by a ghost or traumatised by the death of her governess instantly won her lots of attention - and a notable part in The Lion alongside William Holden and Trevor Howard. She also made a couple of television films for Disney at this time. As her teens progressed, she got the chance to act alongside top talent like Bette Davis (in The Nanny), Dirk Bogarde (in Our Mother's House) and Marlon Brando (in The Night of the Following Day).

At the end of the 60s came the role for perhaps she is best remembered - Sandy, the Wise Beyond Her Years student in The Prime of Miss Jean Brodie, who discovers that her Cool Teacher is ruining the lives of her charges. This put her alongside another top tier talent (Maggie Smith as the titular Jean Brodie). In this time, she also made appearances on American television shows such as Green Acres and Bonanza. She soon graduated towards roles in horror films, starring in Hell House, And Soon the Darkness, Necromancy and Satan's School for Girls. Her final film appearance was in the Exploitation Movie The Food of the Gods, though she made appearances on television until 1981.

She retired from acting at the tender age of thirty-one to focus on raising a family. These days she owns a bookstore in Los Angeles that specialises in rare first editions.