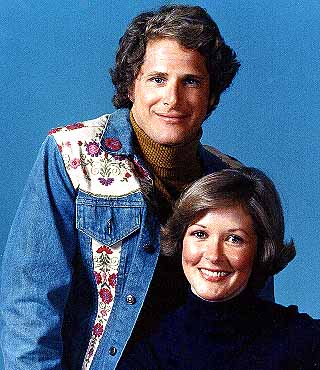 Turn invisible now. Please.
"Special Federal Agent Sam Casey was assigned to Operation Royce Explorer, to retrieve an unidentified satellite from the ocean floor. During the course of the salvage operation, the submerged satellite exploded. The radiation from the blast left Casey alive but invisible. The Intersect Radiation Lab fitted him with a 'DNA Stabilizer'. This enables Casey to both become invisible and to materialize. The complete details are Top Secret: File #487384."
— Opening Narration to Riding With Death
Advertisement:

Gemini Man, based VERY loosely on H. G. Wells' The Invisible Man, was a TV series from 1976 produced by Harve Bennett and Steven Bochco which followed the adventures of government operative Sam Casey, who worked for a CIA-like agency known as INTERSECT. After a radiation accident in the pilot episode, he was rendered invisible, but was supplied with a watch-style device called a "DNA Stabilizer" that allowed him to control the invisibility - with the catch that he could only stay invisible for 15 minutes per day or else he'd die. The series premiered on NBC as part of the Fall 1976 lineup (following a two-hour pilot which aired on May 10 of the same year), but was dropped from the schedule after only five of eleven completed episodes were aired. The series was a bit more successful in Europe, particularly in the U.K., where the entire 11-episode run were aired and even had an annual published.

Most mid-'70s action series with a lifespan that short would quickly fade into obscurity. However, a TV movie compiled from two episodes of the show entitled Riding with Death was released five years later and continued to run on television for many years. The episodes used were the series premiere "Smithereens" along with "Buffalo Bill Rides Again", the latter of which didn’t air in the US network run, and are linked via the common themes of vehicles Made of Explodium and country singer Jim Stafford. The movie itself was featured on a 1997 episode of Mystery Science Theater 3000, introducing it to another generation and ensuring it maintained its notoriety.

For the Mystery Science Theater 3000 version of Riding With Death, please go to the episode recap page.

Not to be confused with the 2019 film or the Mega Man 3 Robot Master.

The show made use of many tropes common among action/adventure fare of the era, among them: