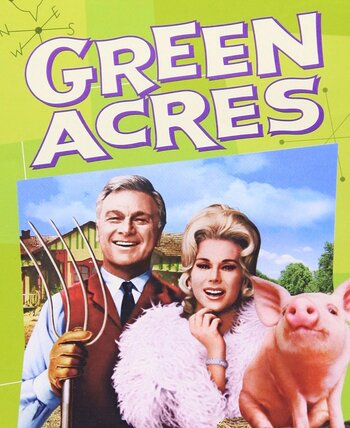 Oliver Douglas: Green Acres is the place to be!
Farm livin' is the life for me!
Land spreadin' out so far and wide
Keep Manhattan, just gimme that countryside!

Lisa Douglas: New York is where I'd rather stay!
I get allergic smelling hay!
I just adore a penthouse view
Dahling, I love you but give me Park Avenue!

Green Acres is a Sitcom produced by Filmways and originally broadcast on CBS from 1965 to 1971.

Oliver Wendell Douglas (Eddie Albert), a successful New York lawyer, and his elegant socialite wife Lisa (Eva Gabor) move to the little country town of Hooterville and buy a little farm that is not in good condition. Oliver intends to set himself up in a simple country life as a farmer, but neither the reality of country life nor the insanity of the locals allows it. Lisa hates the country, but is much better than her husband at dealing with the locals: her idea of haggling with Mr. Haney, the door-to-door salesman, is to lower her price when he lowers his—and it works for her... Hooterville also has a resident genius: Arnold the pig.

A spinoff of the more staid Petticoat Junction, the show was initially a by-the-books sitcom, in which Oliver was portrayed as an obsessive eccentric, while Lisa, despite being rather spoiled and having a poor grasp of English, was meant to be the more levelheaded one. However, the series quickly took on a decidedly absurdist tone; Lisa turned into a Gracie Allen-style Cloudcuckoolander, and Oliver became the Only Sane Man. The insane townspeople continue to see Oliver as an outsider while rapidly embracing Lisa as one of their own. Oliver, clinging tenaciously to logic, splutters and despairs as he sees his dream life in Hooterville slipping rapidly out of his fingers.

Advertisement:
Some of the causes of Oliver's perpetual headache are:

There's also Mr. Drucker (Frank Cady) down at the general store, who acknowledges the ridiculousness of Hooterville while at the same time whole-heartedly participating in it. He's the only character who even approaches being logical by Oliver's standards co-serving as the other Only Sane Man, often leading Oliver to start sentences with "Mr. Drucker, you're a reasonable man...". In keeping with the apparent rules of the series, Mr. Drucker's behavior on Petticoat Junction tends more toward the normal end of the spectrum.

"This has been a Filmways presentation, dahling".