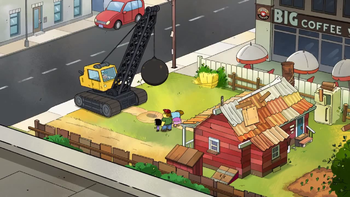 "I'm going to wreck your house, and drive you Greens outta town...once and for all!"note If he does, he'll wreck their legacy as well.
"People of Earth, your attention, please. This is Prostetnic Vogon Jeltz of the Galactic Hyperspace Planning Council. As you no doubt will be aware, the plans for development of the outlying regions of the Galaxy require the building of a hyperspatial express route through your system, and regrettably your planet is one of those scheduled for demolition."
— Prostetnic Vogon Jeltz, The Hitchhiker's Guide to the Galaxy
Advertisement:

A type of conflict wherein a new structure threatens a heretofore Close-Knit Community, threatening its way of life or its very existence. Possibly the work, either overt or covert, of a Corrupt Corporate Executive or a Corrupt Bureaucrat.

The structure involved is commonly either a highway, a big mall, a golf course, a big hotel, etc. Compare Railroad Plot if the project in question is a railroad which is especially common in older works.

Truth in Television, in particular in the three or four decades following the Second World War (1945-1975), when the United States embarked on a massive highway building program. New York City transportation planner Robert Moses is sometimes invoked as the Knight Templar embodiment in conjunction with this trope.

One variation is for the community to be located in a valley that's chosen to be dammed and flooded, either for hydroelectric power generation or as a water reservoir for a nearby city. Another is for a new highway (or other, more convenient mode of travel) to bypass the community entirely, so the lack of traffic reduces the place to a Ghost Town.

In the more optimistic invocations of the trope, the citizens band together to defeat the new highway. In the less optimistic, we learn that progress is unstoppable.

Ansel doesn't mean to sound a little callous, but his next big project is demolishing his old boardwalk in Brooklyn and replacing it with a city expansion.

Ansel doesn't mean to sound a little callous, but his next big project is demolishing his old boardwalk in Brooklyn and replacing it with a city expansion.