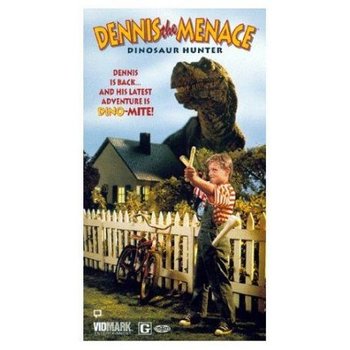 VHS Cover
"No matter how good I feel, Dennis has a cure for it."
- George Wilson to Mrs. Wilson

Dennis and his friends dig up the front yard of the Mitchell house in order to help put in a sprinkler system his father wanted. During the dig, he finds a dinosaur bone. Henry calls in an old friend, a paleontologist named Barclay Schuyler III (nicknamed "Bones"), to see if the bone is authentic. It is and things go downhill from there.Bones has a crew digging up both the Mitchells' and then the Wilsons' propery. Besides disrupting the neighborhood with a paleontological dig and unwanted tourists, things get even worse when an amusement park named Dinosaur Land is going to be built over the neighborhood which will force everyone to move.

Meanwhile, the Wilsons are approaching their fortieth wedding anniversary. Mrs. Wilson wants to go to Hawaii but Mr. Wilson doesn't want to pay for the trip. This leads to Mrs. Wilson getting a part-time job; Hilarity Ensues when Mr. Wilson has to keep house and deal with his wife's boss, Mr. Bonfigli, as a rival for her affection.